Hello, my friends.
The Barony of Thescorre has issued a challenge for their upcoming, virtual event, College of Three Ravens. Share a recipe that one would enjoy to see at an actual feast.  This is my entry. 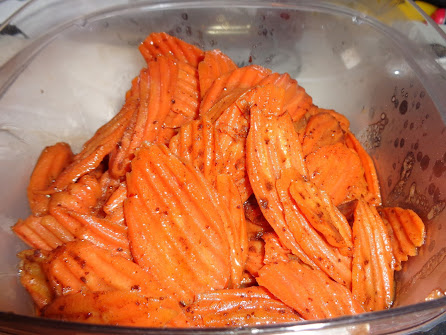 As I have said in my Nobel Prize winning article [1], Per Pale Carrots, this is not a medieval dish, as far as my research shows. This is a dish from the '60s that made its way onto the feast tables of the SCA. If I may quote from my own research:

I think that this is a dish from the 1960s. One of those things that were popular and universally enjoyed, like fondue, and then faded away. Glazed carrots became a popular frozen side dish sold by Birds Eye and Jolly Green Giant by the late 60s. And was also included in Banquet and Hungry Man TV dinners around the same time. I feel that this was a modern dish presented as "period" so that feasters would have at least one recognizable dish on the table. And while it kind of disappeared from the major, American cook books it can still be found in the frozen food aisle at grocery stores. The early SCA really wasn’t the family hobby that it has become in the 21st century, but as the college age kids grew up and had kids of their own, honey-glazed carrots remained on the feast menu so that parents would know that their kids would have one dish of recognizable and tasty food.

The common recipe found on feast menus is as follows:
2 lbs. of carrots
2 Tablespoons of honey
3 to 4 Tablespoons of butter
1 Teaspoon of ground cinnamon
Scrub carrots then cut in half lengthwise and remove the core. Cut into 1 1/2 in lengths. Put carrots in a single layer in a pan or skillet adding 3 tablespoons of butter, honey and cinnamon halfway. Bring to a boil then reduce heat to very low and cover. Simmer until tender. Remove lid and boil off the rest of the liquid. Remove from heat and add 1 tablespoon of butter and shake to coat. [2]
Not withstanding that this is a modern dish, it is tasty and has been a part of SCA feasts for as long as I have been in the SCA. [3] Almost everyone loves this dish: big kids, little kids, Dukes and Earls. I think that we should keep this dish on our feast tables, if for no other reason, because the SCA grew up with this dish.
While my Per Pale Carrots project used purple heirloom carrots, this one will be made with regular, orange carrots. [4]  We will need:
1 pound of carrots, peeled and sliced evenly.
4 ounces of clover honey
3 Tablespoons of butter.
1 Tablespoon of ground cinnamon.
Serves 4 to 5 people. 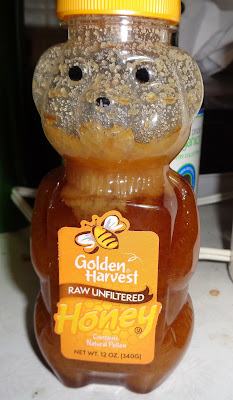 Plain old clover or wildflower honey is fine. All of the honey in my house had started to crystalize. If this happens to you, don't throw it away, just heat up the honey and it will re-liquify. With this small bear, all I had to do was microwave it for 30 seconds, cap open. Then I closed the cap and shook the bear in the same way you would not want to do to a real bear. The heat de-crystalized the honey. 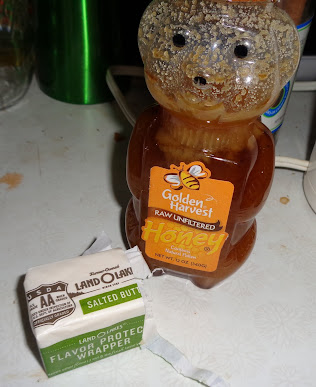 I only had salted butter in the house, [5] which is fine. If you have unsalted butter, I would recommend a small pinch of kosher salt or sea salt in the dish. This won't make the carrots salty, but will amp up the flavors of the ingredients. 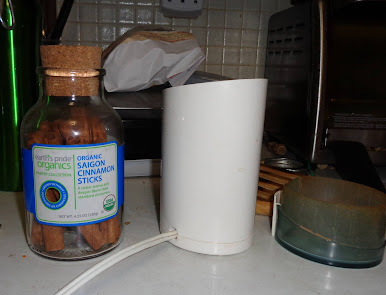 Use good quality cinnamon, not cassia. They are related but not interchangeable for this dish. 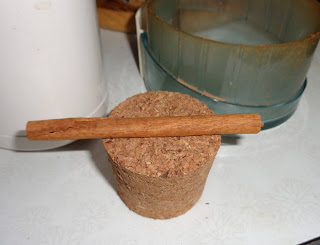 One stick is enough for our dish. I highly recommend grinding your own cinnamon over pre-ground powder, even from a good store. I have a $20 coffee grinder that I use exclusively for spices. You could use a mortar and pestle, but a coffee grinder can powderize it in seconds. 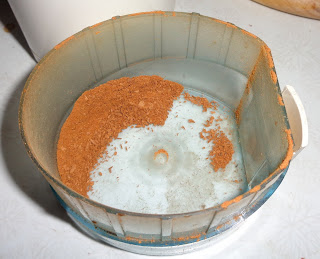 15 seconds in the grinder and we have a nice powder, but with some big flakes. Another 15 seconds reduced everything to fine dust.

You must only use the best, organic carrots. You must hand scrub them and hand peel them using only a hand made vegetable peeler under the light of a full moon. 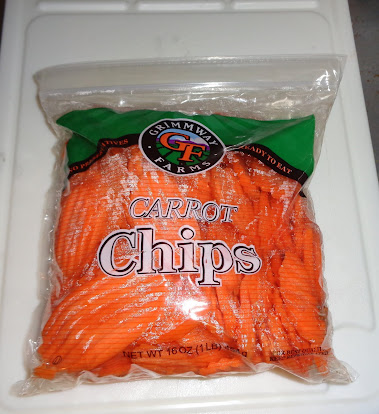 Put your carrots in a frying or sauté pan over medium heat. Let them heat through while you prepare your other ingredients. Once the carrots are warm, make a divot and add the butter. 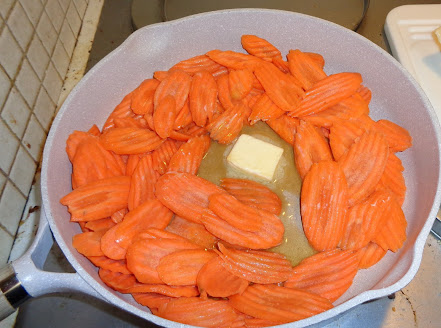 While the butter is melting, dump the ground cinnamon on the butter. 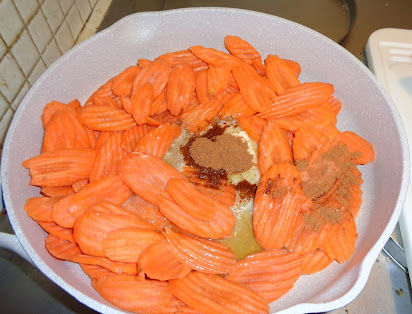 Get the cinnamon integrated into the butter and then add the honey. 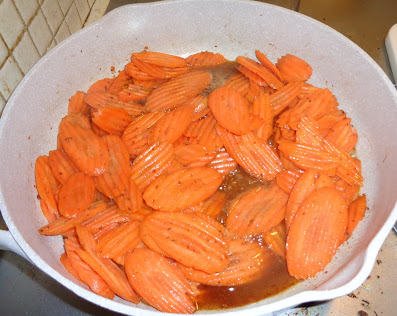 Mix everything together. Make sure to coat each carrot slice. I cannot tell you how long to cook the carrots, it depends on how thick your slices are. But, somethings to keep in mind.
1) We don't want to let our sauce boil. If it does, we risk the fat in the butter separating and instead of a sauce, we will end up with carrots floating on gee with a side of fat.
2) We do want the sauce to cook down and thicken. So keep it at a medium heat and stir often to coat every carrot.
3) We don't want to cook the carrots so long that they become mushy. Do you know who likes mushy carrots? No one. No one likes mushy carrots. [6] 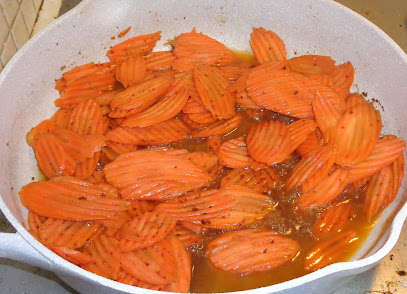 This was taken at the 7 minute mark. The sauce was starting to thicken up and bubble. I had to play with the heat to keep it at this point. At this point I gave the sauce a taste and discovered that I had not cleaned out the spice grinder the last time I used it. When I ground up some dried chilies to make some chili. This was actually awesome. If you want to kick this dish up a notch, add in a bit of chili powder. [7] 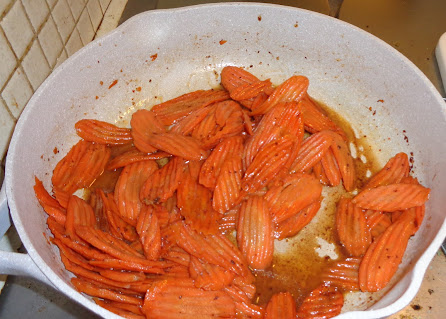 At the 9 minute mark, the carrots were perfect: Soft yet still with a bit of crunch. I turned the burner down to Warm and sopped up all of the sauce with the carrots. I kept it at Warm until the sauce was thick enough to stick to the carrots without dripping off. An excellent side dish: Sweet but not sugary sweet. Firm enough to be stabbed with a fork and still with a crunch. Half of the people in the house loved them. 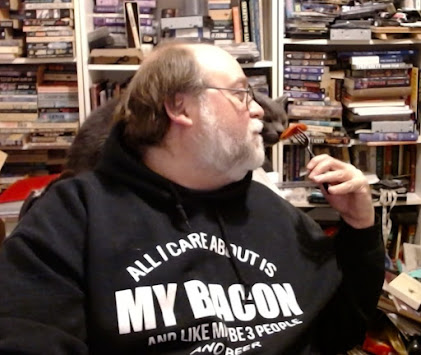 [1] Caleb has never won a Nobel Prize, nor has he ever been nominated for one.
[2] This recipe, almost word for word, appears on 8 different feast menus/recipe books that I have kept from past events.
[3] 30+ years.
[4] I did not want to hunt down purple carrots.
[5] And some Irish butter but I needed that for garlic bread.
[6] This has been scientifically proven.
[7] "Bam!"
Posted by J C Ronsen at 4:26 PM No comments: 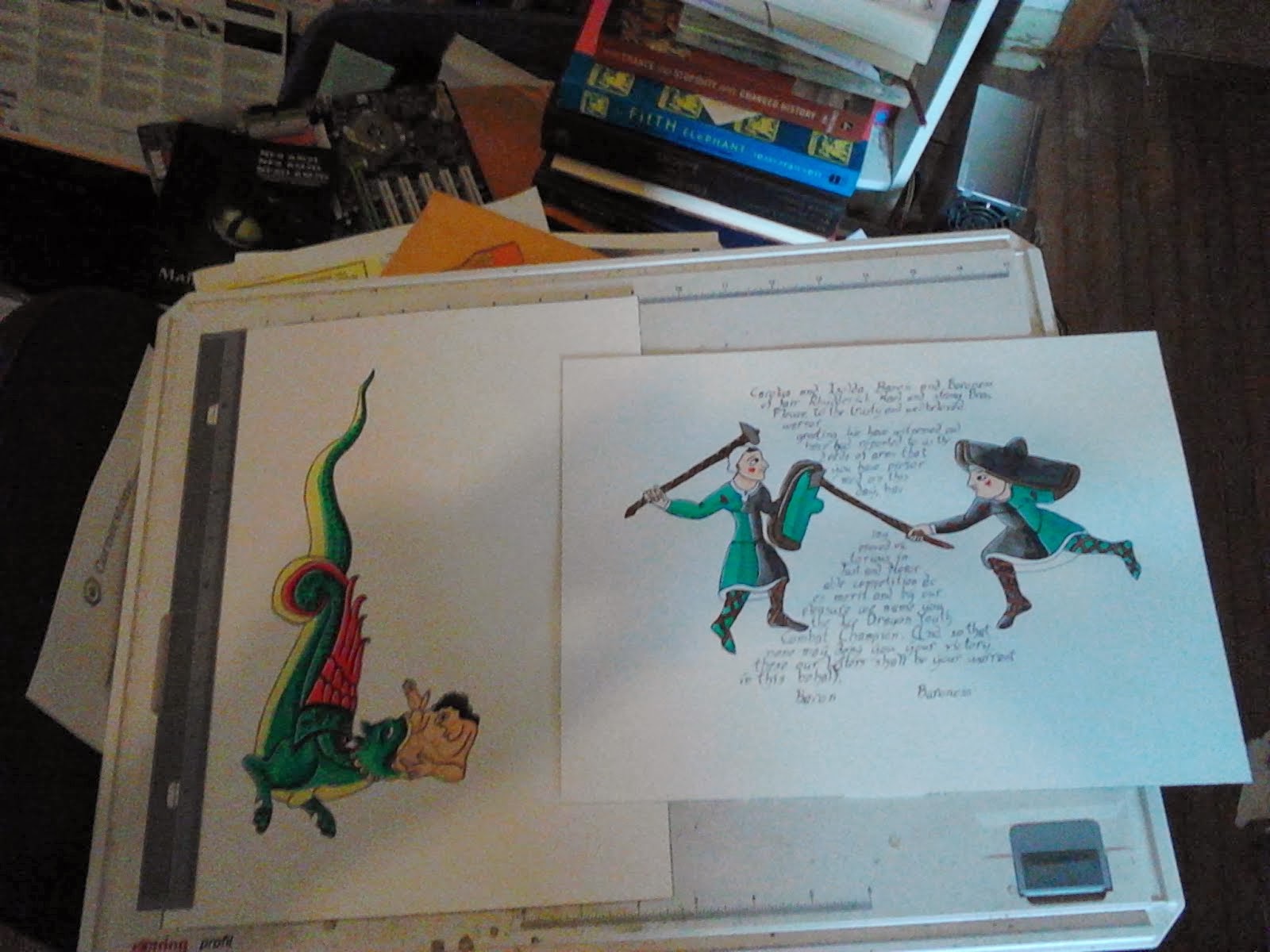 Here is who I am in the SCA. My name is Baron Caleb Reynolds. I have been in the SCA since 1984 and I have tried my hand at many things within the Society: heavy fighting, fencing, archery, thrown weapons, brewing, cooking, sewing, cross stitching, leather carving, armor making and my latest obsession: scribal work.
I live in the Barony of the Rhydderich Hael in the Kingdom of AEthelmearc.
A complete list of my scribal work can be found at: http://www.flickr.com/photos/calebreynolds/